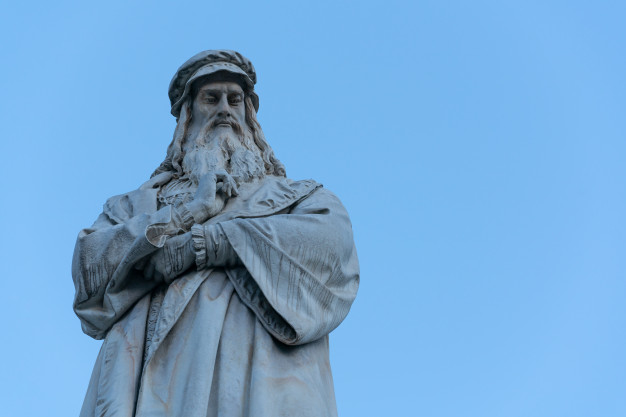 In this world, a lot of genius artists have come, a lot have achieved fame and reputation. When we talk about fashion, and art can be a subject included there. Fashion includes every trending thing, every aspect valued by mass people. If we go into history, we will find out ancient clothing via artworks, like Vincent Van Gog’s own portrait or ‘Salvator Mundi’ by Leonardo. It’s a matter of fact that some of the artworks represented the mindset of painter and creator, their design, and their aspect of clothing. To know more about the trending life of then, we need to know about the artworks and artists, their inspiration, their aspirations. Let’s begin the journey with Leonardo da Vinci, a mystery of all time.

Leonardo di ser Piero da Vinci-this breathtaking name is shortly known as Leonardo da Vinci, a mystery for all time in the history of art! Whenever you say the name Leonardo, you get a face in your imagination, a man with a long crooked nose as the headmaster of Hogwarts, long hair and beard like Rabindranath Tagore, wearing a cap over his head!

That’s what Google shows us, little do we know his secrets that he hid well his nature, the brilliance of his mind! What we get to know is a little portion of his work (fewer than 25 artworks have survived)  from his notebooks. People are always trying to dig up this brilliant person’s life, wanting to know more about the secret massages he left behind in his works. His motives have been the holy grail for the person who is looking at the artworks of Leonardo for the first time. Work represents the master, a secret represents a brilliant mind.

If you want to read another one of our uncommon article about Chemistry and fashion, you can go here!

Although we are not going to discuss the mystery, we will be talking about his early life, his family, his early training, and his companions.

Leonardo was born from a reputed family’s son and a peasant. His full name has a meaning. It means Leonardo the son of ser Piero from the city of Vinci. A name revealing the identity of his father. His father had 6 wives and 12 children born from the 5th and the 6th mistresses. Leonardo had a very distant relation with his siblings because of the age gap. He was the eldest of all.

He had received an informal education in Latin, Geometry, and Mathematics. He has recorded some events from his childhood in his notebooks, about a kite being an omen for his writing, terrified and curious about cave while exploring the mountain and the observation of water, writing and crossing out the river. His early life has significantly caught the eyes of historians. The fruit reveals the tree, but here the fruit and tree were so mysterious that the historians tried to look back at his roots, still, they found a little information about his keen eyes and observation power. His notebooks revealed his vast interest in anatomy, cartography, painting, paleontology, etc. He revealed a few when he was alive. The story of his early life bears a great deal of historical guess.

At the age of 14, he was brought at Florence where his nature turned to bloom day by day. He was appointed as a Garzone (studio boy) in the workshop of Verrocchio, the leading painter, and sculptor of his lifetime. At the age of 17, he became an apprentice of Verrocchio sharing the studio with some other apprentices who became renowned artists of their time later like Botticelli, Perugino, Ghirlandaio, Lorenzo di Cardi. He had command over theoretical and technical skills like drafting, metallurgy, metalworking, chemistry, leatherworking, mechanics and woodwork, drawing, painting, sculpting, and modeling because he immersed himself in diverse training. His training paid off and he had created a world of science with the help of crafts. His odd thoughts with the touch of art became the science of these days. It’s still unknown if he had put all his efforts to learn those skills but it is said that he had a gifted intelligence as well as a thrust for the unknown. As a result, we see a lot of architecture drawing in his notebooks. His painting structure was so much different than other artists of his time.

It is said that once Leonardo worked with Verrocchio in ‘The baptism of Christ’. It is said that Leonardo’s painting was way superior to his master and Verrocchio put down his brush, he never created an artwork again. Though it is an apocryphal story later when the parts drawn by Leonardo were examined, a new brush stroke pattern with a new color mixture was found. This proved his genuine talent in the field of artworks. He probably had worked as a model for his master as some artworks were drawn by his master had similar figures and the structure of his body was similar to them. His first artwork was made of pen and ink drawing in 1473 about the Arno valley which was cited as the first pure landscape in occident.

According to Vasari, young Leonardo was the first to suggest the Arno river as a navigable channel between Florence and Pisa!

Throughout history, Leonardo has been named as the prime example of the Renaissance, a man of universal Genius of all time. His unquenchable curiosity and inventive imagination have made him one of a kind. His approaches were very futuristic for his time. Many historians are still searching for the hidden motives of Leonardo throughout his very few leftover artworks. The journey is compared with the Holy grail quest, a quest for the light of truth!

You can also read another of our premium article on Fashion in the 21st century here!